Flet Python app and all its dependencies can be packaged into an executable and user can run it on their computer without installing a Python interpreter or any modules.

PyInstaller is used to package Flet Python app and all its dependencies into a single package for Windows, macOS and Linux. To create Windows package, PyInstaller must be run on Windows; to build Linux app, it must be run on Linux; and to build macOS app - on macOS.

Navigate to the directory where your .py file is located and build your app with the following command:

Your bundled Flet app should now be available in dist/your_program folder. Try running the program to see if it works.

Now you can just zip the contents of dist/your_program folder and distribute to your users! They don't need Python or Flet installed to run your packaged program - what a great alternative to Electron!

You'll notice though when you run a packaged program from macOS Finder or Windows Explorer a new console window is opened and then a window with app UI on top of it.

You can hide that console window by rebuilding the package with --noconsole switch:

Bundling to one file​

You can package all these in a single executable by using --onefile switch:

You'll get a larger executable in dist folder. That executable is a self-running archive with your program and runtime resources which gets unpacked into temp directory when run - that's why it takes longer to start "onefile" package.

Default bundle app icon is diskette which might be confusing for younger developers missed those ancient times when floppy disks were used to store computer data.

You can replace the icon with your own by adding --icon argument:

PyInstaller will convert provided PNG to a platform specific format (.ico for Windows and .icns for macOS), but you need to install Pillow module for that:

Your Flet app can include assets. Provided app assets are in assets folder next to your_program.py they can be added to an application package with --add-data argument, on macOS/Linux:

On Windows assets;assets must be delimited with ;:

You can find here all PyInstaller command-line options

To create an app package with PyInstaller for specific OS it must be run on that OS.

If you don't have an access to Mac or PC you can bundle your app for all three platforms with AppVeyor - Continuous Integration service for Windows, Linux and macOS. In short, Continuous Integration (CI) is an automated process of building, testing and deploying (Continuous Delivery - CD) application on every push to a repository.

AppVeyor is free for open source projects hosted on GitHub, GitLab and Bitbucket. To use AppVeyor, push your app to a repository within one of those source-control providers.

Now, to configure packaging of your app for Windows, Linux and macOS, add file with the following contents into the root of your repository appveyor.yml. appveyor.yml is a build configuration file, or CI workflow, describing build, test, packaging and deploy commands that must be run on every commit.

You can just fork flet-dev/python-ci-example repository and customize it to your needs.

When you push any changes to GitHub repository, AppVeyor will automatically start a new build:

What that CI workflow does on every push to the repository:

GITHUB_TOKEN in appveyor.yml is a GitHub Personal Access Token (PAT) used by AppVeyor to publish created packages to repository "Releases". You need to generate your own token and replace it in appveyor.yml. Login to your GitHub account and navigate to Personal access token page. Click "Generate new token" and select "public_repo" or "repo" scope for public or private repository respectively. Copy generated token to a clipboard and return to AppVeyor Portal. Navigate to Encrypt configuration data page and paste token to "Value to encrypt" field, click "Encrypt" button. Put encrypted value under GITHUB_TOKEN in your appveyor.yml.

Configure AppVeyor for your Python project, push a new tag to a repository and "automagically" get desktop bundle for all three platforms in GitHub releases! 🎉 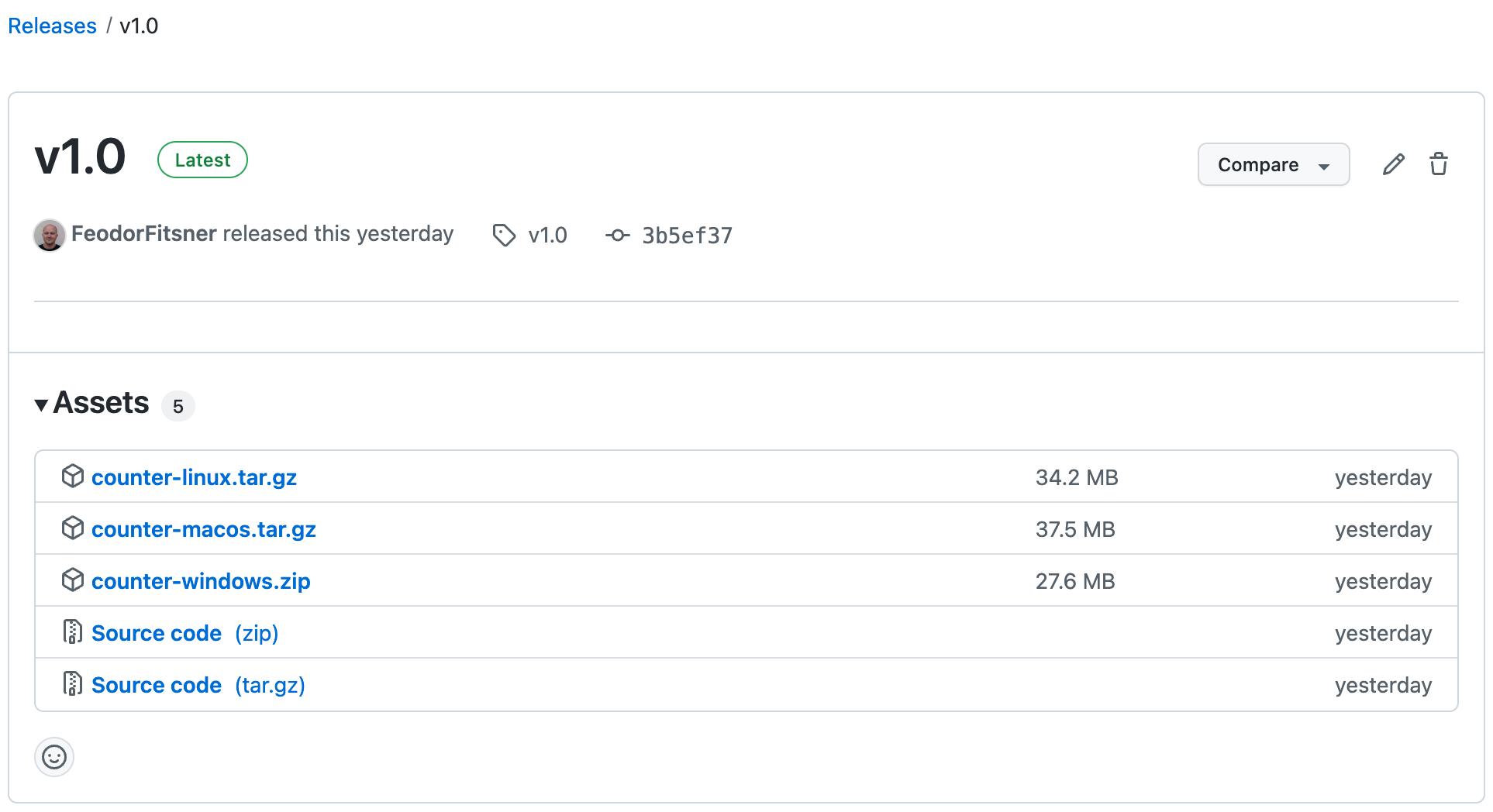 In addition to GitHub Releases, you can also configure releasing of artifacts to Amazon S3 bucket or Azure Blob storage.